Greetings pop-pickers, welcome to another action-packed report filled to the seams of my moans, groans and nutty opinions. Talking of moans and groans, when I was a young man the buzzword was “the great smell of Brut”. If you get a few of my chums together today, you’re more likely talking about the great smell of Voltarol.

So where has Ted been in July? Well, it was return to Witney for another Inspect & Test course, then on to Alton in Hampshire and Barnstaple in Devon for more training.

My alter-ego, the more adventurous version of me, has been very quiet lately and that worries me. He often does this when he’s found some old map or painting with a hidden message that leads to him being chased across Europe until he has to fake his demise. In the past he’s restored old cars and motorbikes so perhaps he’s about to start one of those. I don’t mind but he makes such a bloody mess in my garage while he doing it. He’s lost no end of my 10mm spanners, I only wish I had a pound for every drill bit he’s broken or lost.

Lightnings’ great though isn’t it. Well I suppose it is unless you get struck by it. It’s inevitable that the summer months with rising columns of heat cause of lot of electrostatic charge to build up in the cloud layers and when that happens at some point that charge is going to want to return to earth.

When I was an apprentice I worked on the lightning conductor on the tower of Lincoln College, Oxford and have always retained an interest in the subject. If you do research this field you will discover that much early work was put in by the Church. Only natural I suppose if you are the owner of buildings that are tall enough to attract a strike.

And there is quite a science to lightning. The charged cloud layer is searching for an attractive target connected to planet earth and at the same time the planet’s surface is trying to cooperate by sending up little streamers to facilitate the process. If you are out and about during a thunderstorm and you feel your hair start to rise (assuming you are lucky enough to have some) then hit the deck quickly as you must be very near a rising streamer.

But can you imagine how a few centuries ago they must have considered this to be work of the devil, particularly by attacking church buildings. But as the Church discovered over time, to avoid your spire been blasted to bits the art was to conduct that lighting strike harmlessly down to earth. They also discovered that lightning is attracted to pointy things so that is how we ended up with lightning conductors being run all the way from the top of tall building to earth with a lighting conductor right at the very top known as a “Air terminal”. 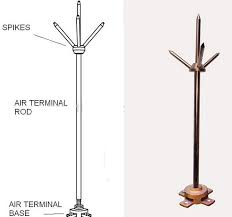 Manufacturers of air terminals will sometimes make claims that theirs are the most efficient at attracting lightning and therefore reduce building damage. They sometimes claim the inclusion of a radioactive component that makes it a “super-attractor”. I think they are banned in most countries nowadays anyway.

There is no evidence whatsoever that radioactivity increases the “attractiveness” of an air terminal, but it does call for a specialist disposal if replacing. 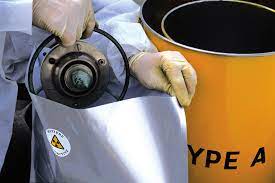 And who said “Lightning never strikes twice”? a good target will continually attract a strike, the Empire State Building is struck about 150 times a year.

What fascinates me more than anything is ball lightning. Many scientists refuse to believe it exists, yet on the other hand, many have spent a long time looking for it or trying to recreate it.

Reports of this phenomena do seem to follow the same MO; always during a thunder storm, being a bright white/blue colour, dimension never exceeding 1 metre but commonly around 200/300mm, floating across the ground, seeking out a metal surface before finally disappearing with a “Pop” and leaving a very strong smell of ozone.

I have a first-hand account concerning ball lightning from a couple I know coming in for a landing at Malaga airport during a severe thunderstorm. Imagine the scene: A Boeing 727 full to capacity. Its late afternoon and although as they say, the rain in Spain falls mostly on the plain, when is does rain, it does so with a passion – day turns to night and you get a tropical storm. The pilot was low on fuel and did not have the option of diverting to another airport. The aircraft was really taking a buffeting and people were crying and praying, the pilot had already made two abortive passes and was coming in a third time. Suddenly, and without any great drama a brilliant white orb about the size of a football materialises on the floor of the passenger compartment. Without any noise it slowly rolls down the metal channel for passenger seats embedded in the floor on the right side of aisle and then rolls back along the track on the left hand side before sinking through the floor and disappearing. Those that did see it all agreed on its appearance and noted a strong smell of ozone.

You could easily see this episode as some kind of divine intervention but following a successful touch-down most passengers copied the pope and kissed the ground before going their separate ways. Now, you won’t get that reported on Sky News or the BBC, its not depressing enough.

My personal view is that it is that ball lightning is a plasma created on rare occasions by the right mix of temperature, humidity, atmospheric pressure and a super-high energy input.

Thinking of Sky and the media etc, how’s about this for an idea?

Scene 1: Lets say I run a newspaper or TV station and I fancy making a few bob. Oh, I know, I’ll buy a shedload of shares in Andrex and let all my media mates know this month’s scam. Soon after that get the newsroom to run a story highlighting toilet roll shortages and how twats are queuing for miles to get toilets rolls. What do you think happens to the share price?

Scene 2: Media people sell their shares before they slump again and buy a villa in Provence with the proceeds.

Nah, that’s much too far-fetched isn’t it?

Oops, you forgot something.

The words you entered did not match the given text. Please try again.